The Center for Regional Economic Competitiveness (CREC) is an independent, not-for-profit organization founded to provide policy-makers from around the world with the information and technical assistance they need to formulate and execute innovative, regional, job-creating economic strategies.

Our staff members come from around the globe, bringing with them diverse backgrounds, and world-class skill sets. 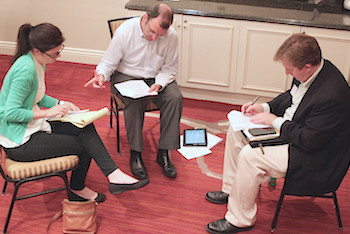 Mr. Buff serves as a Director of Rural Development at the Center for Regional Economic Competitiveness (CREC), performing association management and economic development research duties. He manages the operations of the Development District Association of Appalachia (DDAA), the Association of Public Data Users (APDU), and several committees for the Council for Community and Economic Research (C2ER). Using CREC’s approach to analysis, he creates a data-driven appreciation for regional economies; and he facilitates meetings between economic developers and researchers so that they can better gather and analyze data.

During his time managing DDAA and APDU, Mr. Buff has provided customer service to members, planned for annual conferences, organized webinars, and drafted weekly and monthly newsletter. Mr. Buff initiated the development of the APDU’s first training course on data visualization using Tableau, along with a call for proposals and data visualization awards for the APDU annual conference.

In 2019, the Appalachian Regional Commission (ARC) contracted with DDAA for the project “Building a Recovery-to-Work Ecosystem”, a project providing technical assistance to local development districts (LDDs) and their regional partners to help businesses and individuals in their recovery from substance abuse disorder by attaining and maintaining employment. Mr. Buff managed the “Cohort Learning Academy” helping four LDDs through a year-long process of articulating regional challenges, identifying and engaging ecosystem partners, building momentum toward successful projects, and identifying the resources required to build a sustainable ecosystem.

In past projects, Mr. Buff assisted in the production of state lending programs profiles, a working group report on state Capital Access Programs, a report on state program efforts on lending to underserved populations, and the final report for the State Small Business Credit Initiative for the U.S. Department of the Treasury.

Mr. Buff contributed to the evaluation of ARC to commemorate their 50th anniversary, titled Appalachia Then and Now: Examining Changes to the Appalachian Region since 1965. This work involved conducting focus groups with local organizations to identify qualitative impacts of ARC investments. He has conducted site visits and written case studies on ARC programs in Ohio, Alabama, and Maryland. In addition, he has performed a literature review on resources for entrepreneurs and innovators for the Appalachian Regional Commission.

Mr. Buff worked with the Office of Economic Adjustment in the Department of Defense to produce grantee communications materials; an annual convening of over 150 attendees; webinars for learning communities on a variety of topics; and state program profiles detailing programmatic activities, outcomes, and best practices.

Prior to joining the CREC team, Mr. Buff worked as an intern for a Member of Parliament in London, England, researched best practices in nonprofit capacity building for Dare Mighty Things, and wrote legislative advocacy materials on issues including asset limits, manufactured housing, and tax incentives for the Corporation for Enterprise Development.

Mr. Buff received a Master of Public Administration degree from the George Washington University and a Bachelor of Arts degree in Political Science from Michigan State University.